Press release by the University of East Anglia

Global carbon emissions from burning fossil fuels did not grow in 2015 and are projected to rise only slightly in 2016, marking three years of almost no growth, according to researchers at the University of East Anglia (UEA) and the Global Carbon Project.

The projected rise of only 0.2% for 2016 marks a clear break from the rapid emissions growth of 2.3% per year of the previous decade.

The new data is published in the journal Earth System Science Data. It shows emissions growth remained below 1 per cent despite a strong global economy with GDP growth exceeding 3 per cent.

Decreased use of coal in China is the main reason behind the 3-year slowdown. 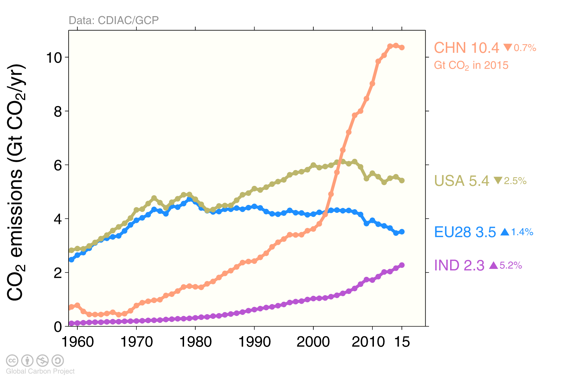 Prof Corinne Le Quéré, Director of the Tyndall Centre at UEA who led the data analysis, said: “This third year of almost no growth in emissions is unprecedented at a time of strong economic growth, and it is possible that the trajectory of global emissions has permanently deviated from the long-term growth trend.”

China – the biggest emitter of CO2 at 29 per cent – saw emissions reduce by 0.7 per cent in 2015, compared to growth of more than 5 percent per year the previous decade. A further reduction of 0.5 per cent is projected for 2016.

The USA, the second biggest emitter of CO2 at 15 per cent, also reduced its coal use while increasing its oil and gas consumption and saw emissions decrease 2.6 per cent last year. USA emissions are projected to decrease by 1.7 per cent in 2016.

The EU’s 28 member states follow the USA as the third largest emitter causing 10 per cent of emissions, and India contributed 6.3 per cent of all global CO2 emissions. 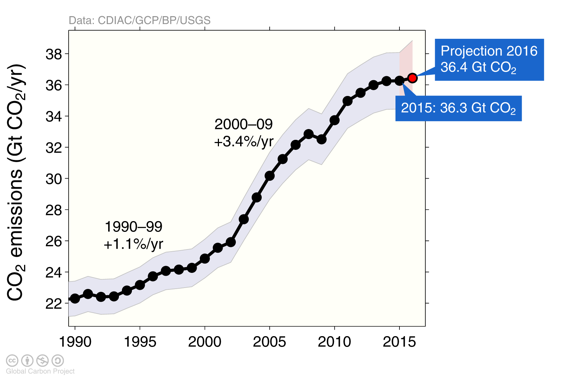 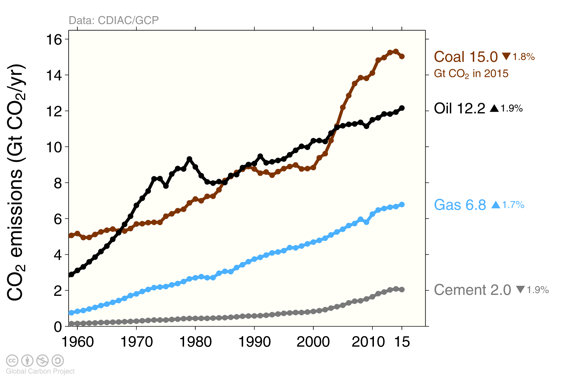 The break in emissions rise is aligned with the pledges by countries to reduce emissions until 2030, but it falls short of the reductions needed to limit climate change to below 2 degrees Celsius.

Prof Le Quéré said: “The break in emissions rise is a great help but it is not enough. The emissions need now to decrease rapidly. If climate negotiators in Marrakesh can leverage ambitions for further cuts in emissions, we could be making a serious start to addressing climate change.”

The Global Carbon Budget analysis also shows that, in spite of a lack of growth in emissions, the growth in atmospheric CO2 concentration was a record-high in 2015, and could be a record again in 2016 due to weak carbon sinks.

Prof Le Quéré said: “Part of the CO2 emissions is absorbed by the ocean and by trees. With temperatures soaring in 2015 and 2016, less CO2 was absorbed by trees because of the heat and dry conditions. Atmospheric CO2 levels have exceeded 400 parts per million (ppm) and will continue to rise until emissions are cut down to near zero. This is the highest level in at least the last 800,000 years.

The estimation of global CO2 emissions and their partitioning among the atmosphere, land and ocean is a major effort by the research community that brings together measurements and compilation of statistical estimates with analysis of model results.

Prof Le Quéré stressed the need for reporting such as the Global Carbon Budget to inform decision and actions on how to respond to climate change.

Dr Glen Peters of the Center for International Climate and Environmental Research in Norway, who co-authored the analysis, said: “Emissions growth in the next few years will depend on whether energy and climate policies can lock in the new trends, and importantly, raise the ambition of emission pledges to be more consistent with the temperature goals of the Paris Agreement.” 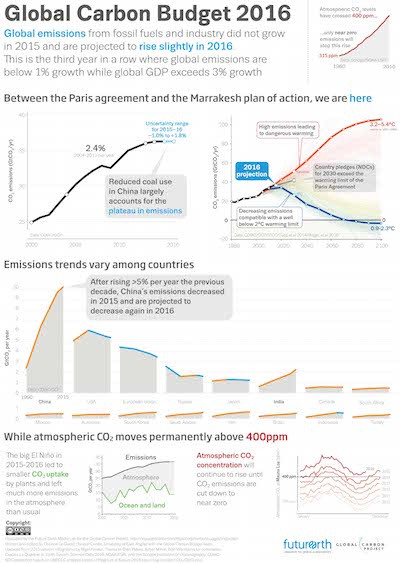 Co-authors from the Bjerknes Centre for Climate Research: