For four weeks, a scientific crew of scientists and students, supported by a ship crew of 15 have been working on 24 hour shifts. Today the four week long cruise on RV G.O. Sars has come to an end, as the ship anchored in Tromsø, Norway August 14, after spending weeks in icy waters with icebergs and whales nearby on many occations.

"It has been an eventful and successful cruise" reports cruise leader Eystein Jansen from Tromsø. "We bring with us 200m of sediment cores from the western Nordic Seas and the east Greenland Margin".

Shipboard analyses indicate that the material the scientists bring home to their laboratories cover a time span from the present and probably a few hundred thousand years back in time.

The cruise had the ambition to retrieve sediments that can document abrupt changes in sea ice and ocean circulation along the East Greenland continental margin, both in glacial times and in the more recent past. For this purpose a suite of different sediment coring systems were used, bringing up to 20 m long sediment cores containing muddy sediments from the ocean floor to the ship´s deck. On board, all sediment sequences were logged and described so that the science party can get an initial feel for the quality and utility of the samples they retrieve, before they are brought to shore for much more detailed analyses.

"We have a unique material which we hope will cast new light on rapid changes in sea ice cover and ocean circulation during past times. The cores should be ideal for correlation to the ice cores drilled this summer at Renland in Eastern Greenland by our ice core colleagues from Copenhagen", says an optimistic cruise leader.

"The material is also a unique resource for calibration of our methods to study past sea ice and oceanic changes to modern conditions, and should give us opportunities to compare the changes of the recent past with those occuring today at high time resolution".

The cruise experienced problems with the quite extensive sea ice cover this summer, but during the cruise the sea ice retreated enough for many sites that were inaccessible at the start of the cruise became sea ice free towards the end.

"Nevertheless we were not able to come into the fjord areas, and those objectives will remain to another option. The project also plans a cruise late next summer, where those possibilities may open up. We also had some problems with the winch system for the long piston coring, but despite of these problems we bring back a nice long core material for the post-cruise studie"s, says Jansen.

"The science crew of ice2ice scientists and students did a splendid job of handling the cores, describing and analyzing the material so that the detailed lab analyses can start right away after the material gets back to Bergen in a week from now. We are eager to start and eager to see the results", says Jansen, who also praise the crew of G.O. Sars for their professionalism, and for creating an excellent atmosphere for the work.

"Being onboard is more like a 4 star hotel despite the harsh conditions. Weather was nice most of the time, but we had some days of rough seas as expected in these areas".

During the first leg of the Ice2Ice 2015 cruise the team was joined by the German tv production company Along Mekong Productions who have kindly shared a beautiful video. It provides the viewer with a bird’s eye view of the cruise, take a look at it on the project pages ice2ice.eu 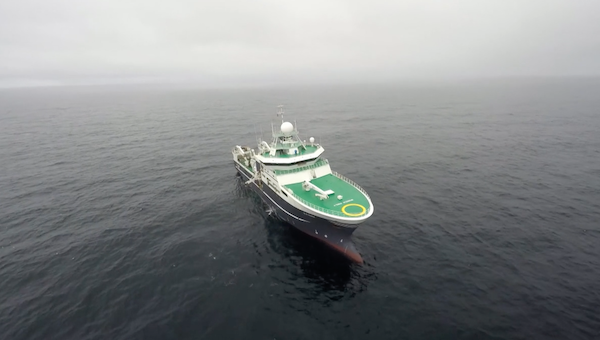